Weight Loss Success Even After PCOS 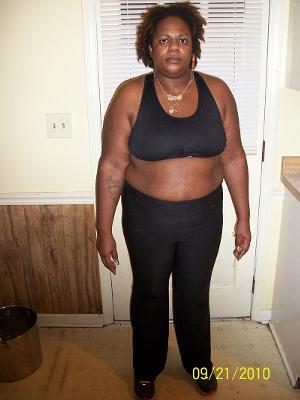 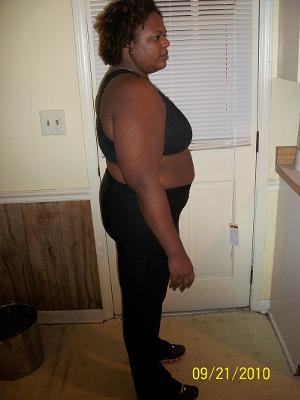 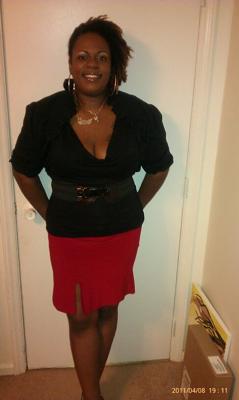 February 2010, I was booking my seven day vacation in Myrtle Beach, SC. I spent the day comparing prices and getting a reservation reserved, but all that was really on my mind was how was I really going to look at 251 pounds in a bathing suit, standing 5'5" tall.

I made a promise to myself that when June 15 came around I will definitely be at least a size smaller, not even realizing at the time that I had ballooned into a size 20.

In the past 4 years, I had gone through a divorce and also had a job that required 10 to 12 hours of my day 5 days a week. I ate out 7 days a week and I frequented places like McDonald's and KFC 3 or 4 times a week and some days 2 times a day.

Plus after I would get off from work at 2 and 3 am I would lay in the bed and eat whatever was around to keep my mind off bad days at work. This was a vicious cycle that affected everyone in my home.

Between February and June my weight fluctuated between 240 pounds and 250 pounds. When I left for vacation I weighed 239 pounds and I truly felt like I had accomplished something. In July I got back my vacation pictures that someone else had taken of me and I was devastated.

Huge was an understatement. I started to look back at the pictures that I had taken over the past 10 years and realized that every year my weight had ballooned more and more. I had very few whole body pictures and I realized that I never let anyone take pictures of me themselves.

I'd become a professional at taking my own face photos. At 18 I weighed 171 pounds coming out of high school, and now at 29 years old I was nowhere near that weight.

I spent the rest of the month of July feeling sorry for myself, overeating and overindulging at any chance that I could. During this time I also started to get really bad headaches, mood swings, forgetfulness, insomnia and often stayed sick to my stomach a lot.

I went to the doctor quite a few times and even had to stay at the hospital a few times. No one could find anything wrong with me, other than the fact that I was overweight, and I had PCOS. PCOS is Polycystic ovary syndrome; it is a condition in which there is an imbalance of a woman's female sex hormones.

This hormone imbalance may cause changes in the menstrual cycle, skin changes, small cysts on the ovaries, trouble getting pregnant, weight gain and the disease also makes it harder for women to lose weight.

But my headaches and mood swings had nothing to do with the way I was feeling. The PCOS was just another low blow at how hard it was going to be for me to lose weight.

I then tried a holistic doctor which was definitely something that was out of the normal for me. He had me write down everything I ate, drink and consumed daily, as well as products that I used such as soaps and lotions.

In two hours he told me what many doctors had never told me, for whatever reason my body could not process aspartame very well and I was using an overabundance of it.

I had been adding different types of artificial flavoring packets to every cup of water that I had drunk for the past seven or eight years. He told me to cut out the aspartame and that it would alleviate my headaches as well as help me further along with my weight loss goals.

He was right, the headaches went away, my memory started to get better and I started to feel better.

At the beginning of August I went to get a pedicure and decided that this was to be the day that I would begin to get healthier and make changes, when I stood up from the chair the man asked me if I liked the design that he had made on my toes. I looked down and the shock overwhelmed me, I couldn't see my feet at all because they were covered by my belly in front of me.

I was heartbroken and ashamed, I told the man thank you, paid him and I went home and that day to make a difference in my life from that point forward.

I pulled out my old Weight Watchers books, as well as my journals, so I could write down everything I ate as well as all of my exercise. It was a horrible struggle because I worked a second shift job that ended late at night. I always wanted to munch on snacks and always had a big craving for crunchy and salty things.

My partner worked second shift as well so when they came home from work they were always hungry. I had to figure out a way get on top of my eating habits; I realized that my eating habits were hindering me more than my exercise routine or lack thereof.

On Sundays I started to pre-cook my food for the week. I would cut chicken breasts into strips and make a nice size pot of brown rice and add lots of vegetables to it. I also made different types of soup so that I could have something to fill me up in between meals.


For so many years I also never ate breakfast but after working out and only eating twice maybe 3 times a day, I started to wake up with hunger pains. At that time I wasn't really sure that's what it was, but after going online and educating myself about how important daily calorie intake was and how important eating every 2-4 hours was for my metabolism, I started to make a few more changes.

I started to incorporate a protein shake every day for breakfast. For taste I would add a half a cup of organic apple juice as well as whole fresh fruits, vegetables and sometimes soy milk instead of apple juice. I learned immediately that the taste of fruit always hid the taste of the vegetables.

I did different exercises every day from riding my bike to walking around the block to going to the gym with a membership that I'd had for two years and rarely used. I did mostly cardio and very little weight training.

I used the elliptical machine as well as the treadmill at least 3 to 4 times a week. I also made sure to incorporate 40 minutes of circuit training, which consisted of push ups, sit ups, jumping jacks, steps and any thing I could do that would use my whole body.

My whole body would hurt daily; things that I never knew could hurt would hurt. It was a constant struggle between eating the foods I loved in moderation and sticking to a workout schedule that I could use for the rest of my life.

My progress slowly started to show, and when I got frustrated I even found a workout partner. Together we did Shaun T's Insanity as well as two-hour workouts at the gym on rotating days.

By December 1, 2010 I finally had hit 199 pounds. I hadn't been less than 200 pounds in over 10 years. I never felt those kinds of feelings as my soul danced around inside of me. At that moment I was free.

It took me a long time to be able to decline certain foods without hurting people's feelings and not feeling bad about it. I knew that my main priority was for me to be healthier, live longer and be stronger then ever before.

I decided that I was going to take a break and let my body and skin catch up with the weight that I had lost. I definitely wasn't happy with some of the drawbacks from the weight I had lost, especially and most importantly was the extra skin, but I've done enough research to know that in time the appearance of extra skin would be minimal.

At the end of February I finally finished my certification and was officially a certified personal trainer as well as certified in group training and nutrition and wellness.

I looked around and realized that I had taken almost 7 weeks off and it was time for me to get back to working out. I also knew that this time I needed to incorporate weight training as well.

I've decided that I wanted a strong foundation in place so when my goals are achieved I can look around and say I didn't just help myself but also have managed to touch the lives of a lot of people around me.

I thank you for your time while you heard my story. I am a Life Coach & Personal Fitness Trainer at Crav Life Coaching in Greensboro, NC. I can be contacted day or night to answer questions and help assist anyone who needs a jumpstart on their goals of a healthier, happier and slimmer them. Thank you... Octavia Johnson